To commemorate the 10th anniversary of the HMM series, the RBOZ-003 Gojulas is back with “The Ogre” specifications!

Featuring a wide variety of new parts not in the normal Gojulas, this model kit has a total of around 1,400 parts! This massive kit is the most voluminous of any Kotobukiya plastic model kit up until now.

The Long Range Buster Cannons boasts a length of 360mm and have a pullout expansion feature at the rear.

For user customization, attachment parts are included so the Long Range Buster Cannons can be attached to other separately sold Zoids (e.g., Blade Liger, Liger Zero).

By pulling the sensor part of the 8-Barreled Missile Pods on the torso, the hatches will open. Also, similar to the IRON KONG PK model, the energy cables contain an internal wire that allows for flexible movement.

Enjoy the overwhelming power of Gojulas The Ogre, worthy of being called the strongest Zoid.

Product Specifications:
・The Long Range Buster Cannons have a full length of 360mm. The large magazine parts are of separate parts and can be removed from the cannons. In addition, the rear of the cannons has a pullout expansion feature. Recreate action scenes with the colossal Gojulas The Ogre firing its cannons.
・The attachment parts for the Long Range Buster Cannons are designed to attach to the Zoid caps of select Zoids such as Blade Liger and Liger Zero that have been previously released.
・The energy tanks on the back can extend their heat-dissipating fins.
・The 8-Barreled Missile Pods are of a hatch design where the hatches will open when the sensor part is pulled.
・The energy cables are designed with an internal wire to allow for flexible movement and posing, the same as IRON KONG PK.
・The large stabilizer attached to the tail not only extends and retracts but can also be moved to act as a stabilizing outrigger to support the huge body of Gojulas The Ogre.
・By removing the main generator on the torso, the internal Zoid Core can be exposed.
・The cockpit canopy can be opened and closed, allowing for a pilot figure from the Helic Republic to be placed inside.
・The container block on the tip of the tail can be opened to deploy the AMD 30mm Beam Cannon. The Maxer Multipurpose Machine Guns attached to the sides can also be folded to be stored.
・The Hyper Bite Fangs on the head feature a pullout joint so that the model’s jaw can be opened even wider for roaring poses.
・The heels are articulated so the model can be posed leaning forward. 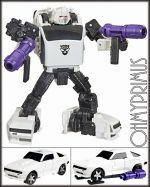 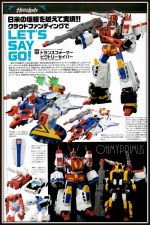 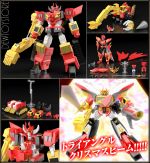 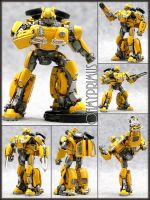 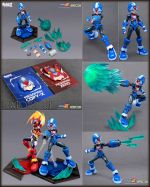 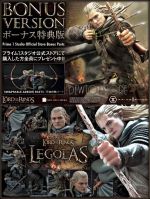 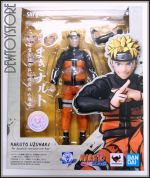 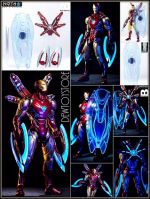 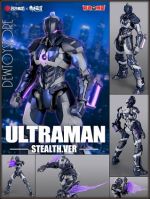